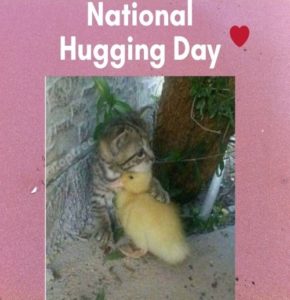 Often our Weighted Gravity Blankets are described as a Hug . Tight and cosy.

So,What makes a hug so special?

Hugging can lower your cortisol levels

Part of the reason participants in the previously mentioned study were able to perform better than their peers is because the hugging managed to reduce many of their stress indicators. Furthermore, NPR reports that hugging has a measured ability to decrease the pesky stress hormone cortisol. “Having this friendly touch, just somebody simply touching our arm and holding it, buffers the physiological consequences of this stressful response,” Matt Hertenstein PhD, told NPR.

Oxytocin is a hormone that is often dubbed as the “cuddle hormone” because of its relationship to important aspects of relationships such as trust, devotion, and bonding. Hugging is one of the activities that releases oxytocins in your brain naturally, helping you bond and strengthen interpersonal relationships. An increased amount of Oxytocin is also associated with better heart health.

A series of studies conducted by the Association Of Psychological Science found that people who were prone to feeling existential dread and fearing mortality were able to find some sense of security through interpersonal touching including hugging.

Hugging can be form of pain relief

Fahad Basheer, MD, writes that hugging can alleviate pain in a number of ways. The first is by releasing endorphins which block pain pathways, the second is by improving circulation which removes pain peptides.

One of the great ironies of current culture is that social media and technology mean we’re more connected to each other than ever before—just not physically. It’s totally possible to spend large periods of time without interacting with another human being in person. This type of isolation isn’t healthy as it can trigger or deepen feelings of depression. The release of oxytocin, sometimes called a social hormone, a good hug can help combat feelings of isolation by helping you feel connected and trust other people. (Tamim Alnuweiri, 2018)

Ever feel in a rut in the wake of an issue with someone your life? A recent study of 400 people over a two-week period found that that receiving a hug following a conflict can help with squelching those bad feelings. So, next time you have a squabble with a friend, don’t leave without a warm, consensual embrace.

So get yourself a Hug today 😊